I’d like to start out by saying that this post is the first in a somewhat long time. It’s been over three years since I wrote anything on this blog and have a lot of catching up to do. I had high hopes for this endeavour of mine but quit abruptly for all the wrong (and stupid) reasons. Now, three years later, with an overwhelming desire to write and share life events, I’ve decided to give this a try again. Hope whoever has read this far into this paragraph will continue on . . .

What I want to talk about today is one the most wonderful fall hawk watching seasons I’ve ever had. Having retired earlier this year I looked forward to more time outdoors photographing, hiking, or just taking in all the sights, sounds and smells of the outdoors. But it was fall that I looked most forward to. Why? Because fall for me means hawkwatching here in northeastern Illinois where I live! It’s something I’ll never be able to explain completely but others that enjoy it as much as I do will fully understand. I’ve been to several hawkwatch sites over the past 25 years but none mean more to me than the Illinois Beach State Park Hawkwatch (IBSP) located in northeastern Illinois along the shoreline of Lake Michigan. Over the past 19 full seasons the IBSP Hawkwatch has become the premier site for inland Merlin migration west of the Atlantic Coast. We also get a full complement of other raptors too but the Merlin shines the most brightly. But aside from the excitement those speed demons bring it is the people at IBSP that make it special.

What made this past fall so special to me personally was partially due in part because of a forced absence I had last fall for medical reasons and limited time available in previous years. I was fortunate to be able to retire earlier this year which made this fall free from any restrictions, timewise and healthwise. Having founded this site in the year 2000 and looking at what it has become is a lifetime reward for me. But I didn’t start it alone. Friends of mine, Janice Sweet and Paul Sweet, along with the park naturalist at the time, Bill Wengelewski, were there at the very beginning and helped make it a success. Today, Paul and Janice run the daily routine of collecting data, recording it and analyzing it. And that’s not to mention the countless observation time they put in and the comfort they bring to our volunteers and visitors. The photo that follows here is myself, Paul Sweet and Janice Sweet taken the first day of the 2018 season. 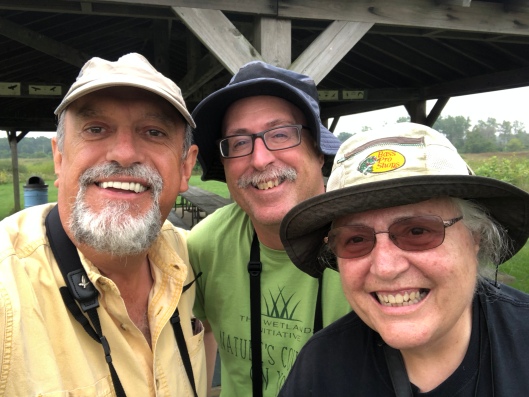 The IBSP Hawkwatch has had an outstanding volunteer base that has been maintained since its inception. The volunteers are the site’s real treasure. Their commitment and loyalty to making it all possible is nothing short of remarkable. I wish I could name everyone that contributed over the years but I have to refrain. The list is long and some may not want the attention. Go to hawkcount.org, find the Illinois Beach State Park Hawkwatch page and go through the daily data inputs. Everyone’s name is there on the days they contributed.

The IBSP Hawkwatch doesn’t get the high numbers of raptors other sites get nor does it offer outstanding views of the majority of what is seen. Most raptors are distant and are invisible to the naked eye. But our volunteers have risen to the task of identifying these “specks with wings” as Paul Sweet once noted to a visitor who questioned how can we even attempt to identify what he called “specks.” Paul replied, “Yes, they are specks, but those specks have wings!”

But what really made this season so special to me was seeing after close to 20 years something I dreamed about on an early November day back in 1999 became a reality. On that day, while still in search of the perfect location within the state park, I remember getting out of my vehicle looking up and seeing a Golden Eagle followed moments later by an adult Red-shouldered Hawk and a juvenile Northern Goshawk. It was the divine intervention, so to speak, that I was looking for. And through the years, the added reward of seeing so many people, of all ages, volunteers and visitors, find the joy in hawkwatching that I have found.

So, what about the raptors? Well, here’s a couple of closer birds I was fortunate enough to photograph this past fall. A Golden Eagle followed by a Merlin (not an easy bird to get a photo of). 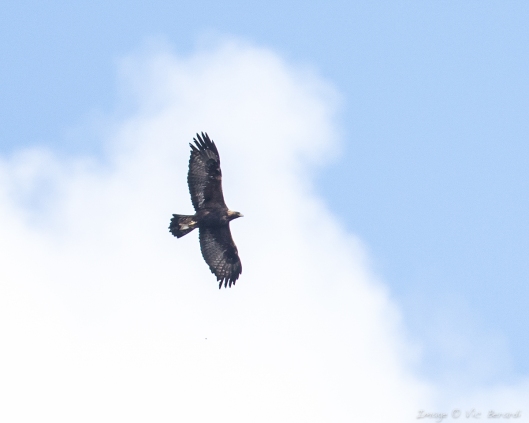 For more information on the Illinois Beach State Park Hawkwatch go to this link:
https://www.hawkcount.org/siteinfo.php?rsite=527

Hope you learned something reading this post and hope you found it enjoyable!

And if you really like what you see here and want notification of future postings please consider signing up for email notifications. Thanks!