In late December 2014, Annie and I took a 5 day road trip through southeastern Kansas/southwestern Missouri to see what variety of Red-tailed Hawks were present.  I can summarize it in one word . . . INCREDIBLE!! 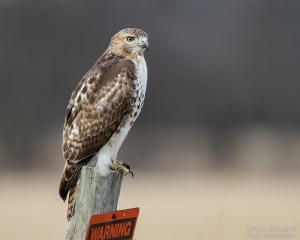 Well over 250 hundred Red-taileds were observed over those 5 days from the morning of December 27th through to late afternoon December 31st. Many were photographed to some degree, although not all were the best of photos, many were perfect for records and further study.  The vast majority were Eastern birds (borealis) and most of them were juveniles.  But we did see many others that were extremely interesting, from almost pure Krider’s like birds to adult Harlan’s and adult dark Westerns (calurus.)  I personally found the adult Harlan’s the most interesting and wished I would’ve gotten much closer to them, not only for observation purposes but also to get much better photos of.  The juvenile Harlan’s were more abundant, about 10 seen total, and much easier to observe and photograph.  But aren’t all juvenile Red-taileds that way? 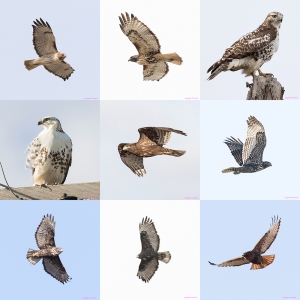 The areas we covered that had the largest number and variety of Red-tailed Hawks were, areas southwest of Olathe, Kansas, most of Neosho County and Linn County, both in Kansas.  In Missouri, we liked all of western Barton County.  I would like to thank Tami Maffitt, Rodney Wright, Andrew Burnett and Travis Ross for the help they gave me in suggestions on places to try.  Without their help our trip wouldn’t have been a success.  We will most likely be returning next year sometime during the winter months and hopefully will be able to enhance the findings of this last trip and make for an even better one!

All images © Copyright Vic Berardi and cannot be used for any purposes without written permission.